Why we need lifetime terms for Supreme Court justices

Recently, the Supreme Court of the United States (SCOTUS) has gone through landmark court cases, from protection of the Affordable Care Act to the legalization of same-sex marriage nationwide.

For conservatives, this has proven to be a step backward, and in an effort to fight the Supreme Court’s same-sex marriage ruling, they have argued that, as Justice John Roberts puts it, “Five lawyers have closed the debate and enacted their own vision of marriage as a matter of constitutional law.” Simply put, each of these judges simply have too much power over too much of a long time; just one vote could swing the entire direction of America. Getting rid of lifetime terms would help put a check on this seemingly infinite amount of power.

Liberals, surprisingly, also have an interest in putting term limits for Supreme Court justices. Many note how a majority of the SCOTUS justices are significantly much older than the general population, and due to this, are out of sync with American citizens. In other words, the rulings and opinions of much older people are being unfairly imposed on the lives of young Americans (who are predominantly liberal), which is simply undemocratic.

Both points are valid, and there has been renewed calls to set term limits on Supreme Court justices. But both points are simply wrong. 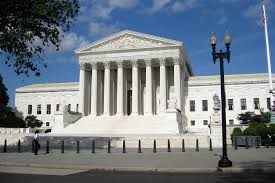 First off, the judicial branch was never meant to be democratic, and for good reason. The Founding Fathers were afraid that the opinions of justices would be too susceptible to popular opinion had there been no lifetime terms. At first glance, nothing sounds wrong– why, isn’t it all the more representative if this were to happen?  What’s the harm?

The problem is popular opinion is not always right. If the majority of a population were racist whites, then surely the Supreme Court would fail its duty to simply follow the popular opinion of its time. Similarly, landmark court cases such as Mapp V. Ohio and Georgia V. Randolph have protected and advanced the rights of criminals, which would likely have been ignored by a majority of the population, who generally do not support criminals. “The dynamic of our constitutional system is that individuals need not await legislative action before asserting a fundamental right. The Nation’s courts are open to injured individuals who come to them to vindicate their own direct, personal stake in our basic charter. An individual can invoke a right to constitutional protection when he or she is harmed, even if the broader public disagrees and even if the legislature refuses to act,” said Justice Anthony Kennedy.

In essence, lifetime terms for justices is a check on the majority itself to prevent abuses on the minority. Both the executive and legislative branches, which constantly have to be re-elected or elected, have to follow the majority to stay on the job; only the judicial branch is free of this.

While many claim that life terms give the Supreme Court too much power, it actually prevents the other two branches from achieving that goal. SCOTUS justices are appointed by the president and approved by the Senate, and as seen in history, they are often chosen according to the president’s tastes. Conservative presidents, like George W. Bush, tended to appoint conservative judges, such as Justices John Roberts and Samuel Alito, while Barack Obama, a liberal, appointed Elena Kagan and Sonia Sotomayor, both who tend to vote pro-Obama on many issues. The fact that the Senate plays a part only factors in its political influence into the court. Furthermore, the retirement of justices can turn political as well, as seen with many urging Justice Ruth Ginsburg to retire now so Obama could appoint another liberal justice to the court, lest it be too late if a Republican becomes president next term.

Obama’s appointment of Sonia Sotomayer in 2009. Credit: The Daily Signal

The solution to this, however, is not to set term limits, as some suggest. True, by giving lifetime appointments, a justice does indeed have the chance to retire at the “right” time. But at the same time, the only times politics influences the court would be at the appointment and the retirement– everything else in between the justices are free from politics and free from political retribution (as seen with conservative Justice Roberts voting pro-Obama a surprising number of times). Setting term limits, which would give rise to higher occurrences of appointments and retirements, would only increase the politics played into the court. It could very possibly give rise to a constant race between Democrats and Republicans on who could appoint the most of their type into the Supreme Court.  Lifetime appointments, on the other hand, would significantly decrease this, as the Founding Fathers wanted.

To sum it all up, Alexander Hamilton noted in The Federalist Papers that “nothing can contribute so much to its firmness and independence as permanency in office.” That includes independence from politics as well as from popular opinion. And in order for justice to be blind, it must stay this way. The Founding Fathers got it right this time around.

Review: ‘The Florida Project’ — Enchantment on economic outskirts of the Sunshine State

by Katharine Lee | Arts and Entertainment

With the rise of social platforms like Be Real and TikTok encouraging authenticity, young filmmakers nowadays seemingly have a penchant for what is “real” or “realistic” about the world we live in today. Perhaps the quest to capture cinematic verisimilitude is...

High school is romanticized as the party-filled epitome of a person’s life, but every high schooler has the inescapable thought of college hovering over their heads.  Google searching Stanford results in images of sunny Silicon Valley and articles about prodigious...

The 2021-2022 season was filled with an enormous amount of surprises. You have the triple crown winner, Cooper Kupp, who was breaking records left and right, eventually winning Super Bowl MVP and Offensive player of the year. You have the Bengals, who went on an...