The matchup that we have all hoped for is here.  The four-time MVP LeBron James vs. this year’s MVP Stephen Curry.  Chaminade writers Connor Hoyt, Matt Patterson and Alec Neimand give their predictions for the 2015 NBA Finals between the Cleveland Cavaliers and the Golden State Warriors.

First, a quick recap of this past season by Connor Hoyt: Well, it’s tough to believe that the NBA season is drawing to a close.  This season has been one of the most electrifying in recent memory and I’ve thoroughly enjoyed following it for the past eight or so months.  To recap the season, I’ll simply place some of my favorite story lines here: Anthony Davis’ absurd season, Kevin Love becoming Chris Bosh 2.0 in terms of both his misusage and sudden irrelevancy when compared to the other cogs of the newest NBA Big Three, Doc Rivers somehow bamboozling his way into an Austin Rivers trade that all of a sudden doesn’t look so bad anymore, and of course, Stephen Curry developing into the best pure shooter that the NBA has ever seen right before our eyes. 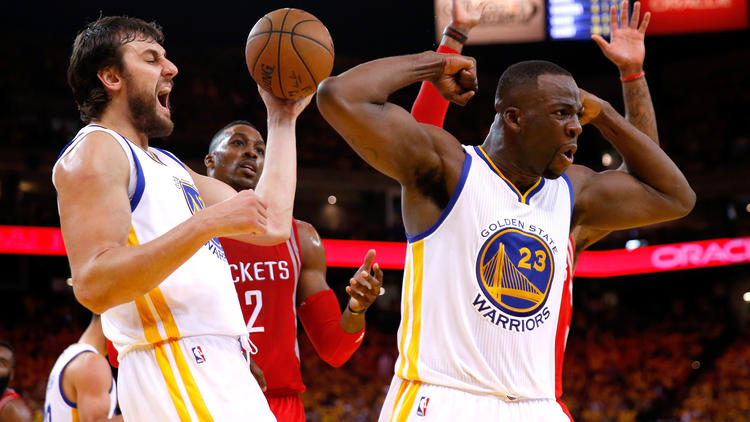 Hoyt: Warriors in six- It’s the end of the road for LeBron and Co.  Getting through the weakened Eastern Conference has already taken its toll on Cleveland from a health standpoint and when matching up with an extremely deep Golden State team, that much will be exposed.  Despite the Warriors having their own question marks, namely in the form of Klay Thompson, I think that so long as Thompson is able to get on the court (he said he’ll be ready for Game 1), Golden State should be fine regardless of whether or not he’s at 100%.

Now into the good stuff… LeBron has been self-admittedly playing the best basketball of his career.  Why might he say that you ask? Well, for starters, his assist and rebound numbers have been spectacular- two areas of his game that he thrives off even more so than scoring the rock.  Nonetheless, he’s been forced to score a great deal especially in the wake of Kyrie Irving’s injury.  Particularly, but not exclusively in the last two rounds, LeBron has been taking an uncharacteristic amount of shots (he’s totaled at least 20 in each game against Chicago and Atlanta).  Of course, delving too far into the box score can be a risky game, but I think it’s worth noting that LeBron is essentially playing as though he were Russell Westbrook in February.  While Westbrook drew heat for taking a ridiculous amount of shots, he was routinely putting up triple-double numbers and somehow keeping a depleted Oklahoma City team afloat.  Too much of the onus is being placed on LeBron and I think that in this situation, against a team this good and deep, the superhuman just might not be able to withstand it all.  Though Iman Shumpert and J.R. Smith (among others) have been playing the best basketball of their careers thanks to LeBron, I think that Steve Kerr and the Warriors have the unique opportunity to defend LeBron in a very unorthodox way thanks their stellar perimeter defense.

Whereas James’ penetration led to easy opportunities for Dellavedova, Smith, and Shumpert in earlier rounds as a result of help defense, it might not be quite so effective if Kerr allows Draymond Green and Andre Iguodala to guard James one-on-one more frequently than did Chicago and Atlanta.  Even Thompson could give LeBron some trouble for that matter; Golden State has a bevy of capable defenders. LeBron has shot just 21% on pull-up jumpers in the postseason, so the Warriors should have no problem letting him shoot.  Frankly, I would not be surprised in the least to see Golden State adopt San Antonio’s 2013 strategy of daring LeBron to shoot, which proved oh so effective until the fateful moments of Game 7.  As can be expected, he has been significantly more efficient on his drives according to NBA Player Tracking Sport VU, scoring 11.4 points per game on them while assisting on 6.9 more.  And so, you beat LeBron by nullifying his already subpar supporting cast.  Jimmy Butler defended LeBron to perfection- force him to shoot 30 times a game while chasing his gritty teammates off of the three-point line and all of a sudden, he’s no longer as effective as he once was and his poor shooting gets exposed.

Assuming that Irving is not yet at full health and probably will not be for the duration of the series, the Warriors must make him work on the defensive side of the ball and push him to exhaustion or force David Blatt’s hand.  Even when healthy, Irving can be a defensive liability and against a Golden State team that can put up a barrage of threes in a hurry, he cannot be hidden.  On the off chance that Kyrie actually spends significant time guarding Stephen Curry, expect him to be torched; on a hampered knee, there is absolutely no way that he can keep up with Curry.  If I’m a Cavaliers fan, I don’t like the sound of that.  Though we all know that LeBron is still the best player in the world regardless of what the Maurice Podoloff trophy says, I think that Curry will have a bigger impact on this series than he will.  With his shooting and passing ability alike, Curry can pick apart Cleveland by if nothing else, attracting more attention than anyone else on the court.

Unfortunately for Cleveland, this series likely will not be won in the paint.  Golden State is such a capable jump-shooting team that it will be able to limit Timofey Mozgov’s influence on the series.  While Tristan Thompson might be able to impose his will on the offensive boards, I just can’t see Cleveland keeping pace if the Warriors get out and running.  Sorry LeBron, but the title will elude you once more and head back to the Bay Area for the first time in a while.  Dub Nation, you believed, and now you won. 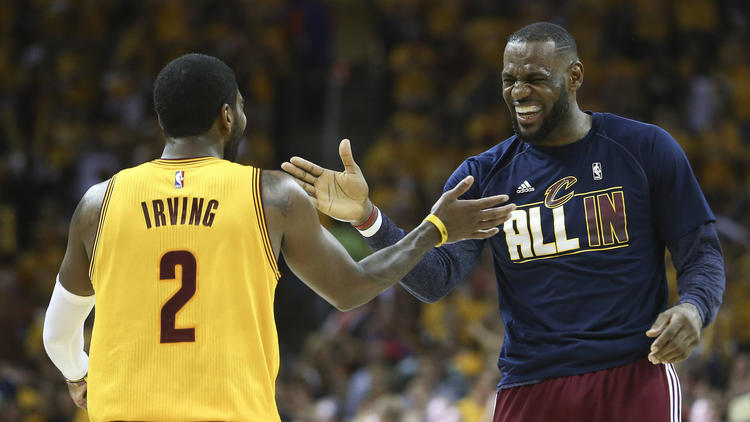 Patterson: Cavs in seven- It is so hard to pick against a team as good as Golden State.  They can shoot, play defense rebound, and are the deepest team in the NBA.  But it’s even harder to pick against a LeBron James on a mission.  I’ll say it now; I believe that the Warriors are the best team in the NBA.  If anybody has a chance to slow down LeBron James, it’s Golden State, as they have four legitimate defenders to throw at The King throughout the series (Klay Thompson, Andre Iguodala, Draymond Green and Harrison Barnes).  The best way to attempt to slow down LeBron is to give him several looks, making him constantly have to change what he is trying to do.  If Draymond is on him, his mindset is to get right by him, but if Klay is matched up on him, LeBron has to change his approach to more post-up oriented.

James has historically struggled against great passing teams that play elite defense: The Celtics gave James nightmares back in his first run with Cleveland, the Mavs exposed James in the 2011 Finals, and the Spurs have been James’ kryptonite throughout his career.  The Warriors are just like these teams, as they play very un-selfish basketball, and lock up on the defensive end.  If one were to design a LeBron James-stopper in a laboratory, the result would look very much like Draymond Green.  Tough, strong, physical, and a huge trash-talker.  I’m not sure how Steve Kerr plans to slow down James, but Green seems like the perfect man to do it.

The Splash Bros. are going to make Kyrie Irving and J.R. Smith work on the defensive end like they never have before.  Remember that I’m still taking the Cavs in this series.  Despite all of these advantages on the Golden State side, something tells me that LeBron is motivated like never before.  He wants this championship so badly, and seems willing to do pretty much anything to get it.  His field goal percentage in these playoffs is historically low, especially from the three-point line, but it’s the leadership that he has shown that has made this run so great.  With Kevin Love out and Kyrie Irving being very limited throughout these playoffs, James has not made any excuses.

Even if Irving remains rattled by injuries throughout the Finals, I’ll still take LeBron with an on-paper below-average supporting cast.  I say on-paper, because this supporting cast is exceeding all expectations.  Smith and Shumpert are both shooting the ball with great confidence, and Tristian Thompson is showing that maybe there are two power forwards in Cleveland that are worthy of some big money this summer.  And what about that Matthew Dellavedova guy?  His shooting and energy off the bench could be a huge factor this series.  Cleveland is at many disadvantages, and if they can somehow close some of those gaps as a team, LeBron should be able to do the rest.  I know the Warriors are pretty much unbeatable on their home court, which is where Game 7 would be played, but LeBron James is simply not losing a Game 7.  I predict an all-time performance from King James in Games 6 and 7, earning him his third Finals MVP award. 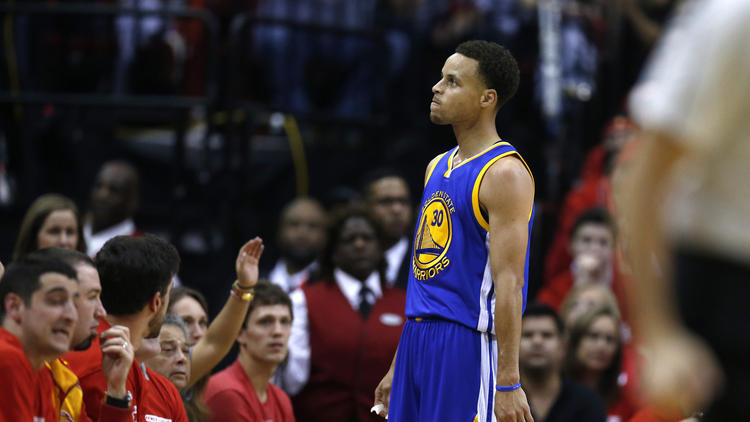 Neimand: Warriors in seven- And then there were two.  Coming into the playoffs, there was no doubt that the Cavs and the Warriors were the two best teams, and now we get to see them battle it out for what we hope to be a seven-game series.  Golden State is battle tested coming into the Finals.  They swept the Pelicans, but Monty Williams had his team fighting in every game.  Then the Grizzlies looked like they had put together a defense that could stop the Splash Brothers, but the Warriors fought back.  Lastly, they dismantled a very good Rockets team in five games to make their way into the Finals.

The Cavs did the exact opposite.  Throughout their eastern conference playoffs, they have faced a young Celtics team getting their first taste of the postseason, a Bulls team who were a shell of their usual self after game 3, and a completely depleted Hawks squad.  After three easy series, it will be a tough transition to now have to play not only the best team in the NBA, but arguably one of the top 10 greatest teams ever.  The Warriors have everything one would want in a championship team.  They have lights out offense, lockdown defense, ravenous rebounding, toughness, grittiness, and the current NBA MVP leading the way.

LeBron James has been on an absolute tear during the playoffs, but Steph Curry has been nothing sort of magical, and he is also backed up by the best, deepest, and most versatile team in the league.  This will be a series that will be remembered for a long time, however in the end, Golden State will be the NBA champs once the game 7 buzzer goes off.