At lunch, many passionate students took the quad to protest the removal of the couches from classrooms. They brought the couches out from classrooms and formed a “couch sit-in.” From the stage they shouted chants such as “Paper burns, couches don’t” and “We won’t stand.”

Students and teachers are criticizing the removal of the couches for numerous reasons.

History teacher Dan Fitz-Patrick has students that sit on his couches as their assigned seat because there aren’t enough desks. His plan for now is to bring in a portable table and chairs from the pod to compensate for the lost seating. He thinks that the removal of the couches is “over the top.”

“My immediate gut reaction was […] ‘Who doesn’t have a couch in their house or anywhere?’” Fitz-Patrick said. “I thought it was stupid.”

“It’s overkill,” he continued. “At some point are we just going to have very sterile jail cells? […] I love the idea that Foothill established a culture with its teachers and its students over all these years.” 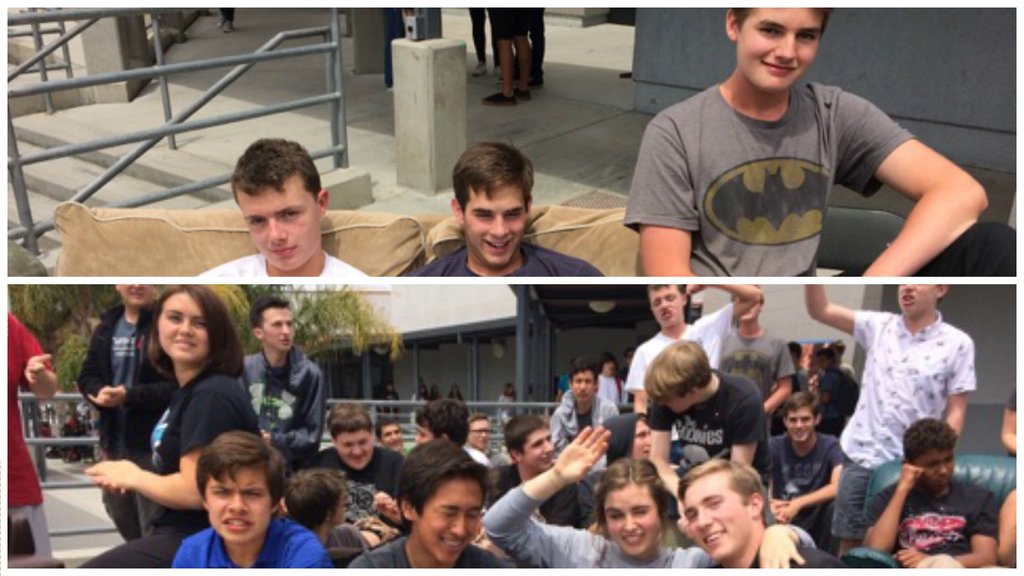 Fellow history teacher Cherie Eulau said, “For me, it’s not actually the couch. It’s that the district is spending time, money, energy and resources on finding things that are wrong rather than looking at successful schools and classrooms and saying ‘Well why is Foothill successful?’”

“Maybe one reason is we make students feel welcome and make our classrooms a place where students want to be,” she expressed.

In addition to the her couches being considered a hazard, Eulau heard that her seating chart was also deemed unfit for disabled students.

“They don’t like my seating chart of my room either,” she added. “Which to me is really bizarre because I designed it so I could get close to as many students as possible and as quickly as possible so that I can walk around the room and help people.”

Although he finds the sit-in “entertaining,” Principal Joe Bova says that “we could argue with [the insurance company] but it’s a compliance issue.”

“The insurance companies won’t insure our school against a fire if there’s things that we’re supposed to comply with that we don’t comply with,” he said. “So basically couches have to go.”

However Bova said that “it’s always fun to see kids having fun and getting involved in supporting something they believe in.”

“This is the Foothill I know and love,” English teacher Jennifer Kindred said regarding the students taking a stand. “Foothill hasn’t changed at all.”

The development of 3D animated films

by Jessica Sheng | Arts and Entertainment

3D animation has gone through many stages to get to where it is today. Clay animation was the first form of 3D animation to exist, using stop motion technology with clay pieces as models. While rudimentary, clay animation can be created to be buttery smooth and as...

Opinion: The impacts of inflation

Inflation is at a record high. As Trading Economics found, the aggregate June 2022 inflation rate of 9.1% has not been higher since November 1981. But what does this mean for the investor? Before diving into the ramifications of such high inflation rates, it is...

Jared Karros has always wanted to be a baseball player for the Los Angeles Dodgers; However, he never thought the possibility could become a reality, even on draft night.  As the rounds passed and Karros watched his teammates, Max Rajcic and Micheal Curialle, get...